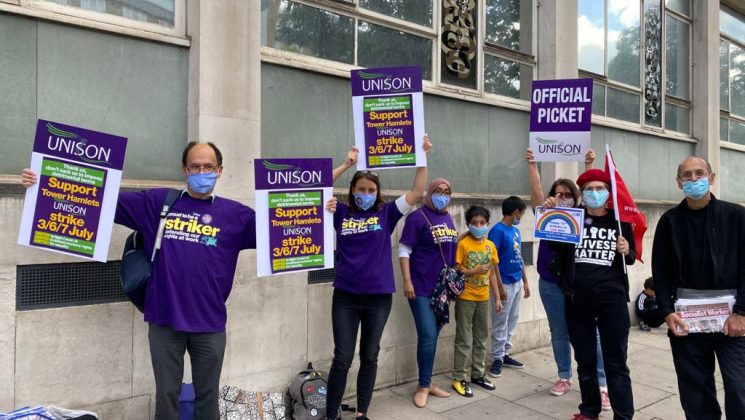 By a thumping majority, our members rejected management’s most recent proposal to end the Trade Dispute on Tower Rewards. Shamefully, those terms were imposed on us last summer at the height of the pandemic, by our Labour council using “Sack and Re-engage” measures that have been widely condemned and that Kier Starmer says he will outlaw.

Management claim that it is “not viable” to make further “improvements” to Tower Rewards. So why is it viable to increase pay for the top but not for the majority of frontline workers? Why is the council spending huge sums on conultancy fees whilst making workers redundant?

Now we’ve got to beat the anti-trade union laws thresholds and get over 50% in our statutory ballot – we did it before and can do it again.

Join our phone bank to #BuildTheBallot

The best way for us to win the ballot is to contact as many of our members as possible, put the argument to them that we need to strike, and make sure they vote.

We’ll be running phone banks throughout the ballot period. Can you take part? 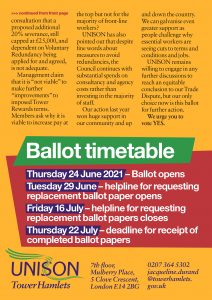 Press Release: Council staff to be balloted for strike action

Tower Hamlets council could face another period of industrial unrest. UNISON members have again voted to be balloted for strike action over changes to their terms and conditions. The ballot opens tomorrow, Thursday 24 June and runs for a month.

The Labour run council  ‘fired and rehired’ the majority of its workforce on a new contract called ‘Tower Rewards’ last summer during the height of the pandemic. The imposed contract was dubbed the ‘Tower Robbery’ by staff and unions as it slashed severance, increased inequality by giving pay rises to those at top but not lower down, and cut a range of other payments and conditions.

In response UNISON members working  across all areas of the council held nine days of high profile strike action over July and August 2020. The Tower Rewards strikes threw a national spotlight on the treatment of key workers during the pandemic and the practice of ‘fire and rehire’ as way of imposing detrimental contracts.

Tower Hamlets council eventually agreed to further negotiations but to the union’s disappointment only agreed to make one minor adjustment. This was rejected in May 2021 by the majority of UNISON members as a basis for ending the trade dispute. Despite  Mayor John Biggs and the Chief Executive, Will Tuckley’s, claim that ‘Tower Rewards’ was not a precursor to planned mass redundancies on the cheap, dozens of  council staff who worked tirelessly serving the community during the pandemic now face jobs losses and redundancy on reduced terms.

Kerie Anne, UNISON Assistant Branch Secretary: ‘Public awareness of ‘fire and rehire’ has dramatically increased since our strike last summer. That Tower Hamlets council and the Labour politicians running it were the first major employer to ‘fire and rehire’ its staff during the pandemic is a stain of the council’s reputation that it  will never be able to shake off. The recent indicative consultation revealed that UNISON  members remain angry about  their treatment and the cuts to their terms and conditions. They have asked to be balloted again for strike action and the union is now taking this forward. UNISON remains open to discussions with the council to resolve the dispute.